The Girl With The Dragon Tattoo - 3 Minutes Of Master Storytelling

I haven’t used this space in a while, but I’m going to fire it up again and use it to talk about storytelling. I consider myself a storyteller. When I write, my choices are made to service the story every time. Just because I planned a plot to go one direction, if the story dictates a change then I make the change. It’s not the way a lot of people write, but it works for me and allows for me to write at a pretty quick pace.

When I see examples of good story telling, I study it. I try to figure out exactly what the writer or director was trying to do and how the accomplished it. I came across a great 3 minutes of storytelling back in 2012 and watched it many times. It’s just shy of 3 minutes, but it’s the opening of David Fincher’s film The Girl with the Dragon Tattoo.

I’m not going to debate the pros and cons of this version versus the Swedish one or the acting or even the rest of the film. I’m just looking at the first 2 minutes and 52 second. You can watch it for yourself.

Now, let’s break that down to what makes it good storytelling. It starts with Daniel Craig descending stairs into a swarm of reporters. He’s trying to downplay whatever just happened while they are making a big deal of this. Fincher could’ve started this inside a courtroom or just outside the door, but he had Craig descending the stairs to show that he has fallen. He’s been knocked from his perch. We immediately pick up on the fact that he’s been taken down a few pegs. But he still has pride and doesn’t address the reporter’s questions other than with sarcasm. You’ll also notice that he is referred to as Mikael by the reporters and he calls one by their first name. He’s connected to these people in some way. We don’t know anything else about him at this point other than something bad just happened to him and he’s connected to the media.

We are then treated to a sound collage that doesn’t tell us what happens, but gives us enough key words to pick up that he’s a reporter, he was sued for libel and lost. We learn that he’s a journalist that tends to go up against big corporations. We can also tell that he went up against someone and his evidence either didn’t exist or didn’t hold up. We don’t find out who he went after or what the evidence was, but that doesn’t matter here. It’s kind of a MacGuffin for getting the story started. Mikael Blomkvist needs to be at rock bottom for him to get involved in the rest of the story.

Mikael moves on to a sandwich shop and we learn a lot about his personality in a brief amount of time. He walks in and knows exactly what he wants without hesitation. Orders a specific sandwich that’s near the top. Not by name, but by pointing. Is it one he likes or is he grabbing the most convenient one? And he gets black coffee. He’s old school, drinks it for the stimulation. He sits for a moment and starts working, again choosing the closest chair. He’s a singular focus person. Like a dog chasing a car, he sets his sites and moves towards it. Everything else is either fuel or unimportant. 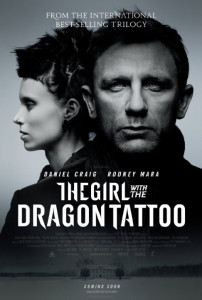 The television continues giving us details of the backstory but it’s a little muddled, again not too important. But it cuts to the head of the corporation he just lost too. That gets to Mikael. He doesn’t like losing. It eats at him. He needs to calm down, so back up to the counter. We hear that he must pay 600,000 Swedish Kronas plus court costs. He asks for a pack of Marlboro Reds and after a quick check, a lighter. He’s an ex-smoker, but not completely over it. He has a brand he prefers… again, decisive… and is still thinks he might be carrying a lighter, so he didn’t quit that long ago. But he opens the pack, takes out one and throws away the rest. He believes in himself enough to know that one won’t take him off the wagon. He is used to being in control of himself and everything around him.

From there we follow him back to the office where everyone stops what they’re doing and stare at him. He is respected and looked up to by his peers, but not well liked. They’re not his friends. If anything, they’re a bit in awe of him and now he’s fallen. They don’t know what to say. And he doesn’t like them. No comment to make them feel better, just a quick “yeah” and then up the stairs. He is detached from all his co-workers but one.

Erika Berger, his editor and the woman he’s having an affair with is the only person he talks to. We see that she isn’t to be messed with when she sends an employ away with a firm gesture. She’s the boos. But even with her he downplays what happened. She tries to take some of the pressure on herself, but he takes it back. This is all on him and he’d have it no other way. He won’t take her down with him. We get the affection when she moves in to his personal space. Not a hug or a kiss, just an intimate closeness. It’s too close to be mistaken but not a full-on display of affection. His comment about being tired and wanted to climb into the duvet for a week, that’s as close as he’ll ever get to admitting he feels like crap. Her response is she’ll tell Gregor she won’t be home… they don’t live together. She is involved in another life… hence it’s an affair.

We cut out of that scene to a magazine cover of Blomkvist in cuffs. It’s his own magazine, Millennium. We know that not because we were told, but because it was on the building and the door when he entered his work.

In less than 3 minutes we learned everything we needed to know about Mikael Blomkvist and can move forward to the next character. Blomkvist is a dedicated writer who likes to take on corruption and greed. He has a dogged determination and is willing to risk everything to win. Everything outside of his crusades is unimportant. He goes with the most convenient things… the top sandwich, the closest chair, the married woman in his office.

If you were to translate this to a comic book, you could do it in twelve panes over two pages.

Page two – Panel One: Going into Millenium.
Panel two: Going up stairs as everyone stares at him.
Panel three: Goes into office as Erika closes the door
Panel four: He leans against wall, a bit defeated. She stands in front of desk.
Panel five: Intimate moment as they touch foreheads.

Most of the dialogue still works and you use captions for the news reports. You save the magazine cover reveal for the first panel of the third page. It’s a nice transition to the next character of Lisbeth Salander.

Fincher made some amazing choices in this movie and I’m disappointed that the sequel didn’t happen.

I’ll be back, somewhat soon, with some more storytelling tips or breakdowns.
Have a great holiday!
Tags: dan wickline, david fincher, storytelling, the girl with the dragon tattoo
Subscribe